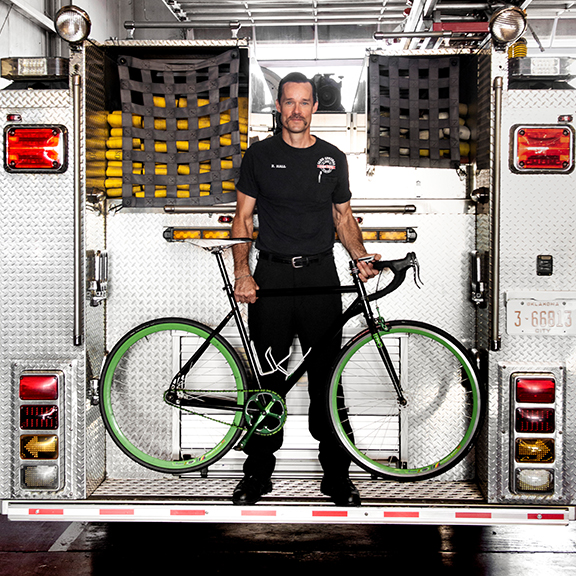 Bicycles were an accident for Ray Hall. Hall was recovering from his second knee surgery in 1996. His doctor recommended a bike but he was not that into the idea. Someone else suggested it soon thereafter. Hall finally gave in and bought one. Retelling the story, he sounds like the choice was hard. He even remembers what day it was, "it was a Wednesday."

"It has been part of my life from that point on," laughed Hall.

By 2005, Hall placed third in the World Championship Mountain Bike Race in British Columbia and was the top American finisher. To ascend to the level which Hall has, it takes love and dedication and some lessons learned. Lessons which he is eager to pass along to his son and others. Hall also mentors kids from Bike Club who have shown an interest in racing.

"The bike gives kids a sense of freedom," said Hall. "My son rides his bike to his friend's house instead of staying in his bubble." Hall now mentors adults and kids alike, especially those who show an interest in mountain biking. His wisdom and love for bikes and life are being passed to kids in Bike Club. "They meet kids on the bike that they would never have met without the bike."

Hall also credits bikes and Bike Club for contributing to academic success. He sees these kids training for races and how it caries over to lessons about school and life. "They learn to train and set goals and to work hard to achieve them."

Hall has recently been featured in an effort to increase awareness of cyclists called "Travel with Care". This joint effort between the City of Tulsa, Indian Nations Council of Governments and Oklahoma Highway Safety Office promotes sharing the road between cyclists and motorists while also respecting each other as individuals.

There is also a philanthropic effort behind Hall's love for bikes. Hall is integral with the Oklahoma Firefighters Burn Camp, helping raise over $18,000. "It costs $500 to send one child to camp. It really helps these kids."

Learn how you can support Oklahoma youth through bikes and mentorship. Information here.

On June 9th, 2009, Ray Hall responded to an accident on Highway 51, south of Sand Springs with his new crew at the Fire Department. The effects from that call still be felt.

A motor vehicle had hit three cyclists. The collision killed two of them and injured the third. Hall was friends with all three. "The ripple effect, the impact... it creates pain and heartbreak. It effects first responders, it effects everyone."

One of his fellow firemen retired soon after that call. That scene kept being replayed in his head. It was too much. "It's a call," Hall said, "that will never leave us."

Hall urges everyone to not drive distracted and to be patient behind the wheel.

"We are all interconnected."

For cyclists and motorists alike, it is never too late for us to show each other more respect on the road.